So here we are, at the end of another year.  2014 will go down in the annals of my personal history as not being so great, but I got to the end of it, (which on some days, didn’t seem to be a likely outcome, and that’s the God’s honest truth).

So now I’m facing the beginning of a New Year, and what I hope will be a less emotionally traumatic period than the past twelve months ended up being.  Each day is still an unknown journey, I wake up most mornings to discover what the day might be going to hold, from the minute I open my eyes.

Some mornings, I’m bright-eyed and bushy-tailed.  Other mornings, not so much. Some days, the black dog has me in his jaws and won’t let go.  It takes little to tip the emotional scales in one direction or another, my emotional psyche remains battered and beaten and heightened in sensitivity to what it used to be.  Little things are distressing, events quickly spin out of control (in my mind) and so many things frighten me, I find it hard to look forward and see the light at the end of the tunnel.  But I’m assured it is there, and consequently, I’ve put some thought into 2015 and what I would like to resolve within my life.  In keeping with the theme which has taken over my life in the past five months, I am considering things in ‘baby steps’ – so don’t expect to see ‘travel the world’ or ‘take up line dancing’ or ‘Attend five Concerts’ appearing anywhere on the list.  Deb’s New Year’s Resolutions take on a much more mundane level of accomplishment.  But one woman’s molehill, is this woman’s Mt. Everest, so here goes: 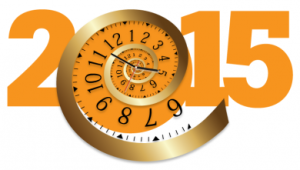 Okay, this might not seem like much to some, but in my case, after decades of living in denial about the state of my mental health, and building up coping mechanisms which I’ve now discovered were actually a lousy way of coping, I’m determined to keep visiting the woman who assures me we can find the ‘Real’ Deb and get me to the point where I can live my life without constant fear and anxiety. (Personally, I think that’s a massive undertaking, and funnily enough – so does she – but I digress.)

Some of you may have already noticed from past blog posts – I loathe these sessions.  After twenty minutes of talking, I’m keeping one eye on the clock, waiting for the hour to be up.  I hate investigating my internal thoughts, don’t like answering the questions about how things make me feel and most certainly don’t like examining the internal workings of my mind.  It’s not a fun place to visit, and I certainly wouldn’t want to live there… oh… wait, I do.)

But I’ve come to the conclusion, after 49 years of living on this planet… that I can’t deal with this on my own any longer.  I can’t rely on Strong Deb anymore, because she got obliterated, completely and totally, during the breakdown crisis of 2014.  The frightened anxious shell which is left, needs help to find her way back into the land of the living.  So my biggest resolution for 2015 is to keep going to see the woman who wants to put my brain under a microscope, and see if I can’t come out of the year feeling stronger and more in control of my life.  And who knows, I might even manage a session with her without taking Steve along to hold my hand…

I’m discussed my issues with friendship before.  I have a three friend limit, I don’t assume anything when it comes to meeting other people and can’t understand why they would wish to be friends with me, when most of the time, I don’t even like myself.  I constantly doubt myself as being valued as a friend and certainly don’t think I’m interesting enough to warrant being called a friend.  And I never actually realize I’m a friend, until its pointed out to me, because I would never assume.

A couple of things happened this year, (besides the breakdown) which caused me to think very seriously about this situation.  One, was the outpouring of love, support and sympathy I’ve received over the past few months through Facebook (my main point of contact) and email (my other preferred point of contact).

Second, was the contact I had with two very old friends on FB, just before Christmas, when I posted a photo of my much younger self, the year we left Melbourne and moved to Western Australia.  Both friends professed to feelings of loss and loneliness after I left Melbourne.  This, was an epiphany to me, something I’d never suspected anyone ever felt about their relationship with me.  And that’s the honest truth.  (The er, psychologist tells me I have issues with self-worth.  Go figure.)

Consequently, in 2015, I’m going to try and approach friendships with far less suspicion and try to believe in the fact that some people actually seem to find me likeable.  When I’m invited to things, I’m going to try and quell the first question which comes to mind (Why did they invite me?  Surely they don’t really want to spend time with me, ‘cos I’m not that interesting, they’re probably just inviting me because they think they should,) and take the invitation for what it is – someone who genuinely likes me and would like to spend time with me.  Which leads directly onto Resolution Three…

Okay, this one is made up of numerous, tiny, weeny little resolutions, (pathetically minor to everyone else, but major achievements for me) listed as follows:

2.  Get into the car and drive somewhere without a keeper.  (I figure I’ll start with around the block, and build up from there.)

3.  Go to the shops without a keeper.

4.  Visit a friend without needing to be dropped off and collected.

And that, is my list of resolutions for 2015.  While for most people, they could probably polish off this entire list on January first, I suspect in my case, it may take a little while longer.  But I think they’re doable, and with a little help, I hope to achieve them.

Best Wishes to Everyone for a Safe, Happy and Prosperous 2015.

We'd heard Cane Corso's can be quite vocal... Mollie asking for her Dentastick 😊 Love the fluffy Muppet in the background!
This probably looks like a fairly unassuming tea towel on a towel rack on the outside of a kitchen cupboard.
Mum. I either want you to retrieve a toy from under the armchair... or I want you to eat your dinner so I can have my Dentastix. I'm sending you messages via doggy ESP 🧠🐾
Yoga Puppy!
When your little brother won't move over...
Day 6. Seems our girl is frightened of the following: