(Medieval Seven is a working title)

The first time I saw Burg Eltz, a medieval castle which is situated above the Moselle River i 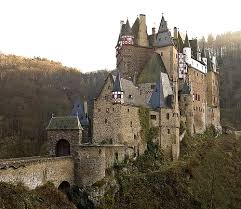 n Germany, between Koblenz and Trier, I fell in love.  The turrets, the precipice, the gate into the castle itself – everything about it spoke to my imagination and I knew there was a story in there somewhere.

Renamed ‘Les Sables Rideaux’, my version of the castle is situated in the Loire Valley, France, near the medieval village ‘Sur Le Marionet’, and I’m afraid my castle is looking a lot worse for wear, after nearly eighty years of abandonment.

When we meet Kennedy Miller, she and her best friend Emma are driving towards the castle, having been informed by the trustee, Monsieur Perrault, that Kennedy is the only living descendant and because of this, she has inherited the castle.

While Emma, a perpetual dreamer and romantic thinks this is the best news she’s ever heard, pragmatic Kennedy is not nearly as enamoured regarding her inheritance, and her opinion is only reinforced when she first gets a look at the abandoned, badly damaged castle.

Intending to make a quick survey of the castle, then inform Monsieur Perrault of her desire to sell it as soon as possible, Kennedy and Emma come across a number of secrets being hidden within the walls, and when they make their way down into the grotto, deep in the bowels of the castle – they discover the biggest secret of all.