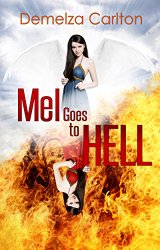 The ultimate forbidden love – when Lucifer falls for an angel.

Luce and Mel unearth an age-old conspiracy behind his fall from Heaven which could doom their love for eternity. Yet in the deepest levels of Hell lies a secret that could hold their salvation.

Eternal damnation awaits any angel who descends into the Pit of Despair, but Mel will move Heaven and Earth to save Lucifer’s soul. Armed with little more than the fury of a righteous angel, Mel will raise Hell in the name of love.

From the heights of Heaven to the depths of Hell, can love truly conquer all?

In the third book in Demelza Carlton’s Hell series, Mel takes it upon herself to try and rescue Luce, after he mistakenly believes that he has killed her and returns himself to Hell.

The book is an entertaining romp as Mel determinedly makes her way through the various levels of Hell, and we’re introduced to a cast of madcap and crazy characters who are in charge of the various levels. These characters are delightfully flawed, thoroughly entertaining, and beautifully written by an author who truly creates an enjoyable romp through mythology mixed with 21st century situations.

It’s so much fun to read about Demelza’s characters and they come alive and have the ability to create a great amount of amusement in this particular reader’s mind.
I thoroughly recommend these books to other readers, and I’m looking forward to the release of the fourth book in the series when it becomes available in 2015.