Nick was adopted as a baby and has a younger sister who is also adopted.  His adoptive parents had no idea he was a shape-shifter and kicked him out of home when the ability presented itself for the first time shortly before his sixteenth birthday.  He hasn’t seen his family since and spent many years doing it tough, a situation he doesn’t willingly talk about.

Left to fend for himself, Nick is thoroughly suspicious of strangers.  Once he gains trust in a new person he’s intensely loyal to them, but is still generally reserved and somewhat cynical.

Nick is the leader of the Lingard Pack, a ragtag bunch of shape-shifters whom he has taken responsibility for.  His Pack is unusual in that it does not conform to the normal shape-shifter rules of being only for one type of animal.  In the Lingard Pack, everyone is welcome and the group includes people who can shape-shift into powerful animals such as wolves, a bear and a lion, along with more mundane creatures such as swans and dogs.

Twenty four years old, Rafe is 6’5″ tall and powerfully muscled.  He is the only lion in the Lingard Pack and takes his role as Nick’s second-in-command very seriously.  Fiercely loyal to the man who took him in when he had nowhere else to go, Rafe will do anything to ensure his leader’s safety.

Generally a serious man, Rafe hides a wickedly sarcastic sense of humor.  He took great delight in helping Acenith in her plan to make Ripley jealous, playing his role as her ‘boyfriend’ to perfection. He and Acenith are very good friends, despite the differences between them as shape-shifter and vampire.

Rafe worked in security for a number of years before he joined the Lingard Pack and is well-equipped to protect others, not only in his shape-shifted form of lion, but also when he is in human form.

Rafe has loved another member of the Lingard Pack for a number of years, but is too shy to approach her and tell her of his feelings.

Jerome is a Doctor at the Puckhaber Falls Hospital, and after meeting Charlotte, he becomes her primary carer.

Jerome is a shape shifter, who turns into a Newfoundland. With grey eyes, greying hair, Jerome is 5’10” tall with a pronounced limp, caused by an attack on his pack.  He has very sharp features, which match his sharp tongue, but his personality is quite genial.

His wife Michelle is a fellow Newfoundland shape shifter but Newfoundlands are extremely rare. In his late forties, with a portly figure, Jerome is supposed to be watching his weight, but has a weakness for chocolate. 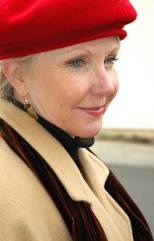 Sixty seven years old, Cecilia Field has provided care for Katie Blackheath since Gwynn and William retrieved her from the foster home where she’d been taken after her parents died.

Cecilia is a lovely old woman and adores Katie.  She’s lived in Puckhaber Falls for a few years having gravitated to the area when she heard about the Lingard Pack.

Cecilia shape shifts into a swan, meaning she is one of the weaker type of shape shifters.  Her husband was killed during an attack on their Game.  Their only son has moved to England and lives with his girlfriend.

Cecilia is 5’6″ tall, graceful and calm.  Her snow white hair complements her blue eyes and porcelain skin, which is gracefully lined with age.

Marco has sandy blonde hair which hangs in his eyes. He’s eighteen years old and appears to still be growing into his body.

Marco has lived in foster homes since his parents lost custody of him due to their drug and alcohol abuse when he was five.

His shape shifting ability freaked out his latest foster parents when he was fifteen and they kicked him out of home.

He was rescued by Nick when he was living on the streets and was being pimped out by a man who intended on selling him to other shifters for sex. Nick took him in and ensured he finished his education.

Marco wanted to locate his parents and find out about his true nature, but when he and Nick started investigating, they discovered that he had been adopted by Antonio and Maria, so they were unlikely to know anything about his shape shifter ability. Marco still hopes one day to find some long lost relatives who might be able to explain who he is and where he came from, but in the meantime he’s happy with Nick and his Pack.

Twenty one years old, David is strong and lean, with suntanned skin. He’s an orphan who’s parents were killed when their pack was taken over by a stronger group. Not seen as particularly strong or useful, David was cast out of the new Pack and taken in by Nick Lingard.

One Reply to “The Lingard Pack”