Walking down the narrow path, I approached the bridge cautiously, trepidation bulding rapidly in my chest.  The bridge was sturdy enough, solid wooden legs secured on either side with heavy planking.

A gate stood ajar, halfway across the bridge.  The panoramic views didn’t change – on either side the same mountainous slopes, covered with a carpet of green grass which fluttered and waved in the breeze.  Yet the gate seemed like an ominous token, silently warning the walker to go this far, and no further.

No matter that the vista remained unchanged, I knew that by stepping through the gate I’d enter another world.

She stepped cautiously towards the ornate staircase, eyeing her surroundings nervously.  The scent of decay was everywhere in the old mansion, the mildew and damp creating a heavy, ominous scent which clung to her nose.

The stairs were littered with the detritus of a building in its death throes, from overhead the ornate plaster work had crumbled, toppling twenty feet to the floor below.  The stairs themselves seemed stable, the ironwork balustrade’s gradually succumbing to the rusts slow march of death. 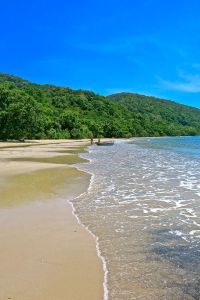 The sun was beating down on the isolated beach, the sky as blue as cornflowers.  Mile upon mile of crisp, clean sand lay in front of us, flat and smooth and untouched by human feet.

The air was fresh; inhaling deeply resulted in a feeling of health and well-being as we surveyed the beauty of our surroundings.

I took a moment to consider, surveying the sparkling ocean, the strip of sand and the riotous mass of greenery which encompassed every shade available.

“South,” I announced and stepped forward.

The glass jar sat on a table in the corner of the room.  It seemed innocuous enough at 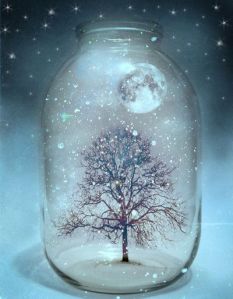 first glance – at least, it was a normal-looking jar until Julien turned off the lights.

The room was plunged into darkness, the curtains closed and no ambient light coming from the hall.  Yet the jar glowed, soft blue light emanating from the inside of the container.

Taking a step closer, Amy was focused on what she was seeing, trying to comprehend a situation so bizarre, she would have to suspend belief in reality as she’d always known it.

Another step took her closer, and from this distance, Amy could distinguish something inside the jar.  She squinted, narrowing her eyes even as her feet drew her closer.

A tree.  Bereft of leaves, a tiny tree sat in a snowy landscape within the glass.  And there was a planet, a miniature moon, lighting the little landscape.

“What is it?” Amy asked breathlessly.