All her life, Topaz Hathor has denied her ability to see the spirits of the dead. She despises her father—an infamous spiritualist—for exploiting his wealthy patrons and the souls that flock to him. But when the spirit of an attractive man appears in her bedroom claiming he’s been drawn to Topaz rather than her father, she sits up and takes notice.
Though not dead, Romney Marsh has been banished from his body while confined to an asylum and can’t remember much besides his name. Yet he can feel Topaz’s spirit calling to his, and he’s not leaving until she agrees to help him. Through an increasingly violent spiral of danger and their discovery of unspeakable undertakings, they bond ever more closely. But can Topaz be in love with a man she’s never touched, or would that be sheer madness?

He observed as, clad only in a silken dressing gown, she spoke at length with a dark-haired man—discussing him.
And when the dark-haired man—her brother?—went out, leaving the two of them alone, seen and unseen, he knew it would be now or never.
Concentrating with unprecedented intensity, he hovered beside her bed, pictured himself as he knew he appeared when in his body, and did his best to make himself look solid.
She turned. Her unusual golden eyes widened, and she saw him.
About bloody time, he thought with a victorious rush. And now what? Could they communicate?
“Who are you?” she breathed in a low, husky voice that should have raised his pulse—did, for all he knew, back where his body lay.
“You can see me?” he asked, projecting the word-thoughts into her mind the way he had projected his image.
“Of course I can see you. Why else would I ask who you are?”
“Romney Marsh,” he supplied the name to which he clung so hard.
Her eyebrows, like two black slashes above those incredible eyes, twitched. “Well, Mr. Romney Marsh, you’ve strayed to the wrong place.”
“I don’t think so.”
“The party’s downstairs in the solarium, where my father’s summoning the souls of the dearly departed. You must have taken a wrong turn at the stairs.”
“No. I don’t want him. I want you.” Abruptly he realized it for truth: he wanted her as only a man possessed of flesh could—and surging flesh, at that. It made no sense, yet he couldn’t deny it.
She shifted slightly on the balls of her feet the way she had just before she took on the two thugs who’d come through the window. Did she, then, think she needed to fight him off?
He said quickly, “I’m not here to harm you. Rather, I need your help.”
She tipped her head. The black hair slid over one shoulder to caress a generous breast. His nonexistent fingers itched.
“I’m not able to help you.” She waved a hand in the air. “Be gone, spirit, to the next realm.”
“I can’t.”
“Of course you can.” She leaned toward him, and her gaze moved over him with considerable interest. “Do not partake in my father’s mischief. Spare yourself that. Move on and embrace peace. I dismiss—”
“No.” He moved closer, and her eyes widened again. “Don’t do that. Don’t send me away.”
She drew herself up to her considerable height, which had he possessed his body must nearly match his. “But, Mr. Marsh, it’s where you belong.”
“It isn’t.”
“Give me one good reason why,” she challenged.
He could give her the very best of reasons. “I’m not dead.” 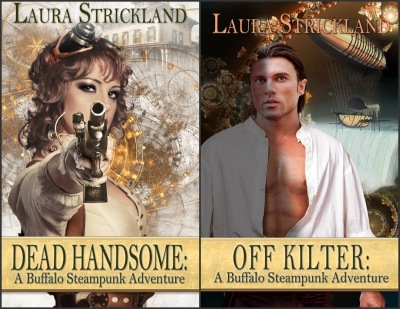 Born in Buffalo and raised on the Niagara Frontier, Laura Strickland has been an avid reader and writer since childhood. To her the spunky, tenacious, undefeatable ethnic mix that is Buffalo spells the perfect setting for a little Steampunk, so she created her own Victorian world there. She knows the people of Buffalo are stronger, tougher and smarter than those who haven’t survived the muggy summers and blizzard blasts found on the shores of the mighty Niagara. Tough enough to survive a squad of automatons? Well, just maybe.
Website ✯ Goodreads ✯ Amazon ✯ Facebook ✯ Blog