Book Review: Burned by A. Blythe 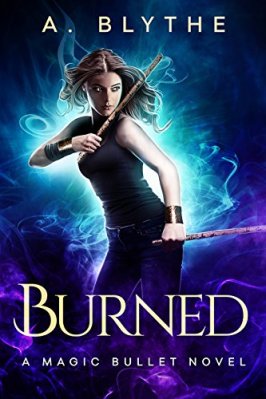 Burned by A. Blythe

Life is good for globe-trotting supernatural agent Alyse Winters until she finds herself on the wrong end of a burn notice. Cuffed and cut off from her magic, Alyse is dumped in Philadelphia where her past is only too eager to catch up with her. Add a few supernatural murders to the mix with Alyse as the prime suspect and she’s ready to do anything to get her powers back…if she can survive being human long enough to clear her name.

This is the first book I’ve read by A. Blythe, and I enjoyed it very much. The main character was a kick ass, gung-ho heroine, who finds herself in an extremely difficult position when her magical powers are snuffed out for some as yet unknown reason. This is the makings of the start of a series, in which A. Blythe has created some genuinely interesting characters, and in the main protagonist’s situation, some unique issue for her to overcome. I thoroughly enjoyed the storytelling, and A. Blythe’s first person writing style with a touch of snark was most entertaining. There were a couple of points during the story where I felt some pieces of information were being repeated unnecessarily, and where the pacing felt a little bit off, but it wasn’t enough to detract from the reading experience. I will definitely move onto the second book in the Magic Bullet series. Highly recommended.