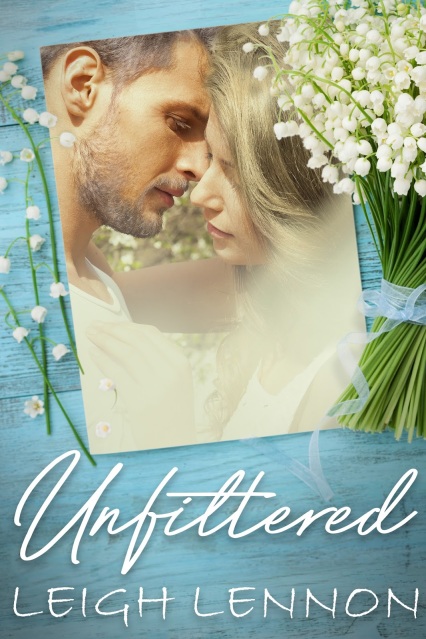 I never will get my happy ending. With my past threatening to ruin the possibility of love in my future, I keep every man at arm’s length. Nick appears out of thin air, becoming a part of my life instantly, leaving me breathless and wanting more. The pain that haunts me is still present, but Nick is worth the risk. When he promises me forever; can I trust him?

Justine makes me see that a forever is in reach with her. She keeps telling me she is hard to love; yet I find it quite easy. Once I break down her walls, she finally lets me in. But, I have a secret of my own which can expose her to the demons that destroyed me in the past. However, with Justine, I will do anything and everything to make her mine.

Justine is my future and I can’t imagine a life without her as my future. She is nervous about the next step yet I won’t let her go that easy. “Are you really that uncertain of us?”

Leaning forward, with an affliction of righteous anger fueling me, I snap, “I fucking hate when you put yourself down like that Justine,” Her eyes instantly shift in dilation over my brashness, which has never been shown to her.

“Whoa, buddy,” she says as a warning. “Don’t you see? I am scared that I will be the one to screw this up, that is all.” She asks, her hands shaking. I grab them to bring calm to her.

“I am doing all I can to show you I am not like those that abandoned you in the past. Don’t you see that?” I look away, trying to not attach myself to the hurt in her eyes, placed by others, but I am not the one who placed all that crap there. “I haven’t had a lot of long-lasting relationships. You once told me that you suspected Rafe stepped out on you well before you left him.”

She looks down, as if she was silently telling me she hates the direction of this conversation. “Yes, that is true.”

“I think this is affecting you more than you’re willing to admit. And sure, this relationship of ours is moving fast, but I think when you are our age, you just don’t care about the petty shit you do when you are twenty. We have something special, Justine.”

“But you’re still scared,” I press for an answer.

“Hell yes, I am scared. You came out of nowhere right when I wrote off being able to love again.”

“You are too damn proud of a woman. You don’t have to act all macho with me.”

“But I have had to do just that for so long. Rafe was a shitty husband and a really shitty dad until Hildy came around. And how do you think that made me feel. He wouldn’t change for the kids and myself but with her, he did. Which I guess is good, she wouldn’t put up with the half-assed dad stuff. But he wouldn’t change for me. So yes, I have been on my own, even during our marriage, on my own.”

“And that has made you the mom and woman you are today. But more so, honey, that has affected how you let someone love you. I am not Rafe and you are not alone anymore.”

“So, what does that mean?” she asks skeptically.

“I’m not leaving you. I’m here and we are going to make this work because I love you. I can’t see growing old with anyone else but you. So please let your guard down when it comes to me.”

Justine is not one to cry but she has let her exterior hardness down and tears were openly flowing. “I never thought I needed to hear those words before, but it is such a relief to hear them from you,” she says.

I kneel in front of her and bring her to the floor with me. “Let me take on that burden. Can you believe me when I say I won’t leave you? No matter how much you push me away; you are stuck with me.”

“Yes,” she says as I embrace her. In that moment, I feel every worry receding from her body because she has found her person and I have found mine.

Leigh has done a number of interviews over the last month. Visit these sites to learn more about Leigh and her books.

Leigh Lennon is mother, veteran and a wife of a cancer survivor. Originally with a degree in education, she started writing as an outlet that has led a deep passion as she wrote twelve books. Now ready to publish all of them, she lugs her computer with her as she crafts her next story. She can be found drinking coffee or wine, depending on the time of the day.