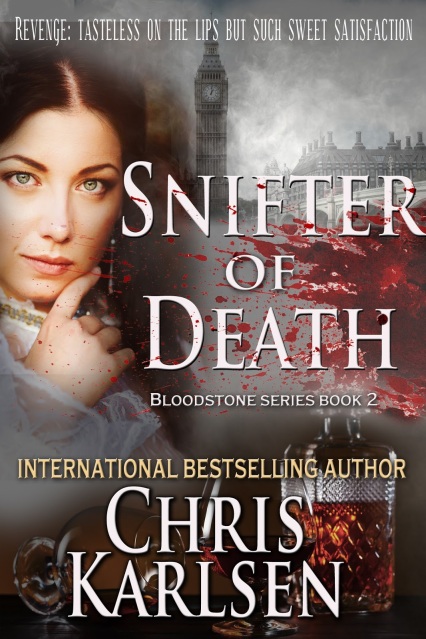 The summer of 1889 was proving to be a strange one for Detective Inspector Rudyard Bloodstone and his partner.

They had a sexual pervert loose. The man didn’t actually harm women but threatened them at knife point, fondling them, and ultimately stealing their stockings.

Far more serious were the murders of influential men, which appeared random other than they were all killed by arsenic poison. Never had he and his partner had cases with so little workable evidence.

Also, the rivalry between him and his detective nemesis at London’s other police department was intensifying. That nemesis was the boxing champion of their department and looking to challenge Rudyard, who never trained as a boxer.

Besides Rudyard’s pride being at stake, and the pride of his station, his nemesis also had in his possession a photograph of the woman Rudyard cares very much for. The new lady in Rudyard’s life had captured his heart and he’d fight the devil himself to save her reputation.

“What address do you show for the Cross family?” the Vicar asked. Her mind went completely blank. Finally, she blurted the only one that came to her, which was no doubt wrong. “Park Lane.”

The Vicar smirked. Not smiled. Smirked. That meant it had to be wrong.

“I suggest you start there. In the meantime, I will have my housekeeper escort you out. I don’t know what you’re playing at but I don’t care for mischief. You’ll do your soul a good turn to drop a coin in the poor box on your way to the street.” He rang a small bell on his desk and the housekeeper came. “See this lady out.”

Graciela stood on the top stair of the chapel cursing her luck when a man’s disturbingly familiar laugh interrupted her thoughts. She took a quick step to the left and flattened herself against one of the portico pillars. The horrible laugh rippled over from close by. It sounded like Detective Bloodstone’s from the morning she’d bailed out Addy. He’d said something that sent the shine boy scampering away and had all the detectives snickering, including Bloodstone.

Taking a deep breath, she peered around the edge of the pillar expecting to see the detective. His presence would’ve been the perfect end to this entire St. Jude’s Chapel mission-turned-catastrophe. To her great relief, it came from a carriage driver. She hadn’t noticed a group of them gathered at the corner waiting to be hired. Graciela, you had no reason to be frightened. You’d done nothing wrong. Stop being such a ninny.

She left the church and headed home. Zachary would be getting up from her nap soon. The whole way home she questioned her luck. A dozen people are murdered every day in London.

How hard can it be to kill someone?

It is the time of Jack the Ripper, the widowed Queen Victoria sits on the throne of England. The whole of London is on edge wondering when or where Jack will kill next. The Palace, Parliament, and the press are demanding the police do more to find him.

In another part of London, rough-around-the-edges war hero, Metropolitan Detective Inspector Rudyard Bloodstone has his own serial killer to find. Inter departmental rivalries, politics, and little evidence to go on hamper the investigation at every turn. In a battle of wills, Bloodstone presses forward following his instincts in spite of the obstacles.

Adding to those problems, away from the strains of the investigation, he is engaged in the ups and downs of a new relationship with a lovely hat maker. 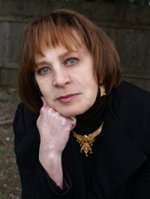 Chris Karlsen is a retired police detective. She spent twenty-five years in law enforcement with two different agencies. The daughter of a history professor and a voracious reader, she grew up with a love of hisotry and books.

An internationally published author, Chris has traveled extensively throughout Europe, the Near East, and North Africa satisfying her need to visit the places she read about. Having spent a great deal of time in England and Turkey, she has used her love of both places as settings for her books. “Heroes Live Forever,” which is her debut book, is set in England as is the sequel, “Journey in Time,” the third is “Knight Blindness.” They are part of her Knights in Time series. All three are available as a boxed set on Kindle. She is currently working on the fourth in the “Knights in Time,” series. “Golden Chariot,” is set in Turkey and the sequel, “Byzantine Gold” is set Turkey, Paris and Cyprus. They are part of her Dangerous Waters series.

Her most recent release is called, “Silk” and is book one of a new series, The Bloodstone Series. It is a suspense set in Victorian London.

Published by Books to Go Now, her novels are available in digital, ebook, and Android App. and in paperback. “Heroes Live Forever” is also in audio format.

A Chicago native, Chris has lived in Paris and Los Angeles and now resides in the Pacific Northwest with her husband and four rescue dogs. A city girl all her life, living in a small village on a bay was a interesting adjustment. She’d never lived anywhere so quiet at night and traffic wasn’t bumper to bumper 24/7.

One Reply to “Snifter of Death by Chris Karlsen”