MISSING: THE LADY SAID NO 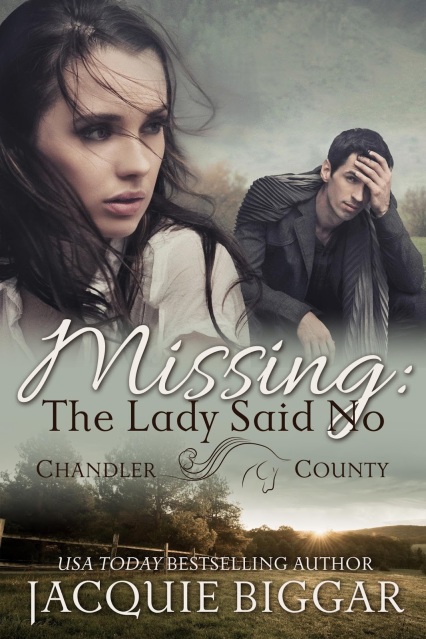 Detective Augustus Grant is faced with his most baffling case to date. Well-respected race horse breeder, John Jorgenson, is murdered in his den days before the Kentucky Derby and the list of suspects is growing.
Complicating matters, Gus’ ex-girlfriend is the last person to have seen the victim alive.
Rebecca Hayes owes the Jorgenson family her loyalty. They gave her a new life after a disastrous affair leaves her alone and pregnant.
With all the evidence pointing in Becky’s direction, will Gus do his duty?
Or follow his heart?

“If there’s something you want to share; it would be just between the two of us.” He waved the bread in the air.
She hesitated, then glanced around before leaning close. “Mr. Jorgenson was real worried about his horse, Forever Humble. I thinks he has a lot invested in the race. Emmett says he’s been hanging out at the track night and day.” She covered her face with her hands, one bandaged white, one black. “It’s just so sad.”
Hmm. That was interesting. He’d heard rumors around town that the Jorgensons were in financial straits, but he’d put it down to jealousy and human nature. Obviously, there was more to the story than he’d figured.
Maybe even enough for murder?
Gus finished the soup and thanked the young cook before making his way into the main part of the house. Fine hardwood floors and the dark wainscoting lined the walls. Everything was polished to within an inch of its life and glistened from top to bottom. How could anyone feel comfortable in a place like this? Bet the Jorgensons never kicked their feet up onto the coffee table to relax, or left their rooms in robes in search of a midnight snack. This was the type of house that demanded decorum.
As if to prove his verdict, a man came into view at the end of the hall. He was directing the coroner, Nancy Huggins, to a room with a police guard, disapproval radiating from his immaculate frame. He wore a suit nicer than Gus’ funeral attire, all three pieces starched and pressed to perfection. A wrinkle wouldn’t dare latch itself to those clothes.
Gus looked down at his own rumpled shirt and skewed tie and shrugged.
Nancy caught his eye and raised her brow. “Augustus. What brings you to the back of beyond?”
The manservant turned, and a chill crawled down Gus’ back. The guy had the deadest, black eyes he’d ever seen.
“I’m…ah, here to investigate the Jorgenson case. The Brass called and requested me for this one.”
“Hmm, must be important then. I heard you received a medal from the President.”
Gus squirmed.
He hadn’t done anything to deserve a medal. It was pure luck that he figured out the plot to kidnap the President’s daughter, and was able to catch the perps before they got away with the deed.
“Why were you in the back of the house, sir? That area is reserved for the servants.” The manservant folded his arms and waited for an answer. Gus felt like a misbehaving child all over again.
“I, ah… came in from the pool, after talking to Mrs. Jorgenson. She gave me permission to question the staff as I see fit.” He met the man’s coal dark gaze. “And you are?”
Gus didn’t think it was possible for the broom handle to climb any further up the man’s butt.
“That’s Ernest. He takes a while to warm up to strangers,” a lilting voice drifted down from the upper reaches of the home.
Gus froze. His heart battered the walls of his chest. There was a ringing in his ears. The chicken soup threatened to revolt.
“Hello, Augustus.”

JACQUIE BIGGAR is a USA Today bestselling author of Romantic Suspense who loves to write about tough, alpha males who know what they want, that is until they’re gob-smacked by heroines who are strong, contemporary women willing to show them what they really need is love. She is the author of the popular Wounded Hearts series and has just started a new series in paranormal suspense, Mended Souls.
She has been blessed with a long, happy marriage and enjoys writing romance novels that end with happily-ever-afters.
Jacquie lives in paradise along the west coast of Canada with her family and loves reading, writing, and flower gardening. She swears she can’t function without coffee, preferably at the beach with her sweetheart. 🙂
Free reads, excerpts, author news, and contests can be found on her website. You can follow her on Facebook, Twitter or email her via her web site.
Jacquie lives on Vancouver Island with her husband and loves to hear from readers all over the world!You can join her street team on Facebook, her exclusive Review Crew or sign up for her newsletter.
Amazon ✯ FaceBook-author ✯ FaceBook-personal ✯ Twitter ✯ Goodreads ✯ Website