A Promotional Tour for the Mystery Angel Romance Series 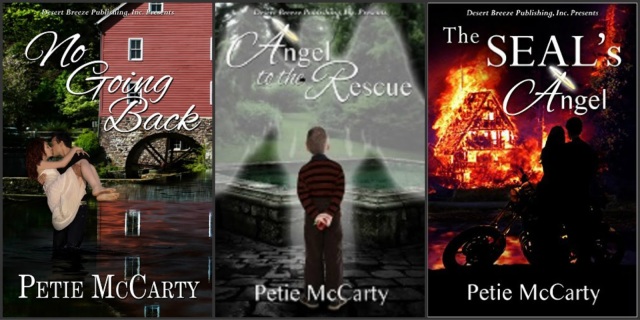 Kellen Brand’s inheritance turns out to be a whopper — one dilapidated farm in West Virginia and one guardian angel! Since Kellen is convinced no sane woman would choose to live in Riverside, she vows to sell her farm and quick.

Her handsome and reclusive neighbor Luke Kenyon must block the farm sale or risk exposure of his family’s secrets. While Kellen has located one potential buyer, she faces a town full of objectors. Someone is trying to frighten her off, and Luke is forced to step in and rescue her more than once.
Unfortunately, Kellen can’t seem to stay out of trouble. She stumbles onto a clandestine hazardous-waste-dumping operation next to her farm, and she prays Luke has one more rescue up his sleeve. It’s her only hope of staying alive.
Unless her mother really did leave her a guardian angel…

A horse whickered behind her, then the telltale creak of a saddle — too close for comfort. Kellen froze. The hair on the back of her neck prickled as though lightning were about to strike. Ankle deep in the water, she couldn’t make a decent sprint for the car, and she regretted her impulse to visit this deserted stretch of riverbank.
She eased around and saw the towering silhouette of a powerfully built man astride a huge black stallion, the rider’s face shadowed beneath a wide-brimmed Stetson. The cowboy made an impressive, and at this moment intimidating, sight — a throwback from the frontier days of the wild wild West.
The horse whickered again and sidestepped away from the edge of the embankment, forcing the cowboy to twist around to keep her in sight. She could feel his dark eyes studying every inch of her. The intensity in his gaze raised goosebumps on her arms and sent a tiny shiver vibrating up her neck. Trapped here along the edge of the river, she felt vulnerable yet strangely unafraid. Would he come any closer?

ANGEL TO THE RESCUE (Book 2)

Child psychologist Rachel Kelly isn’t quite sure how to handle the situation with her newest client — a six-year-old boy who says he can talk to angels and one is coming to help Rachel. She already has her hands full of trouble this Christmas season, and things quickly take a turn for the worse when a stalker crashes Rachel’s Christmas party and takes her young clients hostage.

Police negotiator, Lt. Jake Dillon, walked away from his fiancée Rachel when she suddenly balked at having kids. His kids. Yet when the hostage crisis erupts, Rachel calls Jake first. Now he has a choice to make — stand back and wait for the cavalry to save Rachel or step in and try to save her himself. Time is running out, and Jake may be their only chance for rescue.
Unless Rachel’s little angel-spying client is telling the truth…

“Want to tell me what that was all about?” Wally asked, when they climbed into their Crown Vic.
“No.”
“You said ex-fiancée.”
Jake ignored him, hoping he’d shut up. Seeing Rachel — touching her — had shaken him.
“She’s gorgeous.”
He shot Wally a fulsome glare.
“Just saying is all. Kind of hard to believe you’d let somebody that gorgeous get away.”
“Drop it,” he growled.
“But we’re partners. Partners talk.”
“We’ve only been partners for three days.”
“We can still talk about stuff that bothers you,” Wally prodded.
“Nothing’s bothering me,” Jake snapped. “Come find me in three months. We’ll talk then.”
“But as real partners, we’re supposed to share–“
“No, we’re not,” Jake bit off. “You don’t need to know everything about me.”
Wally stuck his palms up. “Okay, okay. Gees! Doesn’t matter anyway. Some things I can see for myself.”
Jake glowered at him again. “What are you talking about?”
“I thought you said to drop it?”
“Spit it out,” Jake snapped.
“I can see you’re not over your ex-fiancée. Yet.”
Jake swung the Crown Vic hard into traffic. “You’re crazy.”
Wally shrugged. “I don’t think so.”

Foreclosure looms for Cory Rigatero as she fights to keep her rustic resort near Mt. St. Helens afloat after her brother deserted her to join the SEAL Teams. Cory’s whole world dives into a tailspin when Sean MacKay shows up at her resort with the news of her brother’s death and the wild suspicion her brother may have sent her traitorous classified documents. No way will Cory trust MacKay — the man who once seduced her and then vanished into the night without a trace.

Mac hauled ass for the main house, Garth huffing hard alongside, already winded and trying to stay on his heels. Something had happened to the dog, but he couldn’t worry about that now.
The two broke through the border of the side garden. Mac could see the kitchen door of the main house standing wide open and raced that direction.
A second scream ripped through the air. This one sounded closer to the front of the house, and Mac turned course to race in that direction. Garth stayed straight and bounded through the kitchen door as Mac cleared the corner on the house.
He stumbled when he spied a man wearing a black hood and dark clothes — a knife held at Cory’s throat — half-carrying, half-dragging her down the front steps. Mac skidded silently into the rhododendron bushes lining the porch. The assailant hissed over his shoulder to someone behind him.
Okay. Two tangos.

A wolf-like howl suddenly echoed in the house, clearly audible through the open front door. A heavy thud, a scream of pain, and vicious snarling sounded in rapid succession. Mac had backup. Garth had made it inside.

Petie earned a Bachelor’s degree in Zoology from the University of Central Florida, which was no help at all when she decided to write romance novels as a second career. Her particular background did afford her the luxury of many unique assignments during her career as an aquatic biologist, including aquatic plant surveys in Florida lakes and streams by airboat. Many of those off-the-wall assignments provided background for her stories.
Petie spent most of her career working as a biologist at the Walt Disney World Resort, “The Most Magical Place on Earth.” What could be more magical than driving by Cinderella’s Castle on your way to work every day? Living in the heart of the theme park entertainment industry constantly tweaked her imagination and made her want to write. She had the fun of working in the land of fairy tales by day and creating her own romantic fairy tales by night. She eventually said good-bye to her wonderful “day” job to write her stories full-time.
These days, Petie shares her home on the beautiful Cumberland Plateau with her horticulturist husband, a spoiled-rotten English springer spaniel addicted to green olives stuffed with pimento, and a talkative Nanday conure named Sassy who makes a cameo appearance in Angel to the Rescue. She loves golf, running, and reads voraciously. That’s Petie, not the conure.
AMAZON ✯ WEBSITE ✯ FACEBOOK ✯ GOODREADS ✯ TWITTER ✯ PINTEREST ✯ YOUTUBE

← The Beast Within by Jacquie Biggar
No Reservations by R.E. Hargrave →