ALL JAZZED UP
Book One: Love, Lies, & Ninja Missions
by Tracy Ellen 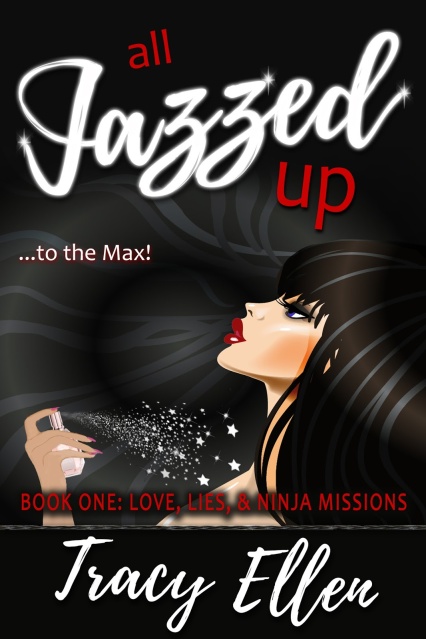 A pretend marriage. A real desire. Being friends with no benefits has never been hotter! Jazy Axelrod’s in love with the hunky man-whore Max Byrd, who also happens to be her best guyfriend! Even worse, Jazy soon gets Max isn’t into her that way. But Max has problems, too. A woman is trying to trap him into marriage. Max begs for Jazy’s help. Jazy decides to give Max more than he ever bargained for. Can Jazy seduce the cynical player in just a few short weeks to believe in her, and happily-ever-after? Or does Jazy learn real love needs no convincing? A stand-alone HEA romance.

“I can have sex with other men when we’re married, right?”

“Hell no you can’t have sex,” Max ground out between clenched teeth. “We’re supposed to be newlyweds in love. What if Angela found out?” He shook his head at my puffed out lower lip. “I’d have to divorce you. That would defeat the whole purpose of everything, now wouldn’t it?”
“Jesus, I hope you’re not going to be this grouchy when we’re married. I thought since you get to have a pregnant girlfriend running around, I could have a little dick on the side, too.” I laughed a little and corrected, “Well, not a little dick, but some dick.” At his continued glare, I spread my hands palm up with a belabored sigh of acceptance. “Okay, okay, but if I can’t have sex, then you can’t have sex.”
“Neither of us can fuck during our marriage.”
After he delivered that F bomb, we stared at each other in shocked silence for a few moments.
Max recovered first, tugging slightly on the collar of his shirt and clearing his throat. “So we agree. It’s a marriage of friends with no benefits.” Max shrugged, as if it was no big deal that his cock saw ten times the action of your average penis on the streets.
Double shit. I closed my eyes for a second at his words, trying to imagine months and months with no sex. I’ve gone nearly insane after these last four days of erotic dreams, even the odd one.
I try to be a good friend to those I care about. But what was I getting out of this damn deal, other than the guarantee of carpel tunnel in both wrists from a future filled with massive amounts of masturbation?
I nodded jerkily.
“Was that a yes?” Max demanded in a pissed tone.
“Yes, dammit.” Not that I blamed him for being irritable, since I was also feeling the pinch of the no sex rule already. “What about my big money?”
“What about it?” Not missing beat, Max went on, “Since we’ll be living together, I’ll pay all our living expenses. Agreed?”
Putting a hand to my forehead at what living together meant, I moaned, “Oh dear God.” I dropped my hand and sighed in defeat. I didn’t eat much or use much electricity, so Max’s normal bills wouldn’t increase much, wherever we lived. “Okay, agreed.”
Still somewhat reeling that I’d actually said yes to his idiotic scheme, but seeing no way out now that I’d given my word, I wriggled in my seat feeling incredibly put upon. Whenever I feel put upon, I tend to get belligerent.
Max laughed, but there was a challenging edge to his voice. “Why do you look mad if you agree?”
I blurted, “I’m not teasing about the money. I think it’s only fair I be compensated for my role as your wife.” At his blank stare, I continued hurriedly, “I mean, I know we’re friends, and generally I wouldn’t charge a friend for help, but I’m putting myself at your disposal for ten months. Ten months! I’m giving you all my time and my acting skills.” Thinking of the no sex mandate, I choked out, “I’m putting my whole life on hold to help you.”
Eyes unreadable, Max responded evenly, “True. So what do you think is fair compensation for posing as my wife for ten months?”
A straight jacket in a fucking insane asylum was the correct answer, but I replied briskly in a business-like manner, “A new furnace, a new roof, new insulation for my house, a new fridge,” I glanced at my wrists, thought for a second of my pitiful health insurance plan, and went for it all before I lost my nerve, “and some cash set aside for possible future surgeries.”
He raised his brows at that but only murmured, “How much cash you talking?”
“Umm,” I scrambled to recall my deductibles, “uh, five thousand?”
“You don’t sound sure.”
“I’m sure.” I nodded, as if I hadn’t noticed his small smile.
He shrugged. “Deal.”
“Good.” I nodded brusquely again.
Letting out a breath at his easy agreement, I didn’t care if Max was amused. I was happy the negotiations were over–asking for money did not come easy for me.
In the past, James Byrd had offered me business loans to get ahead. Max had offered me cash, no strings attached. I’d stubbornly refused both of them. I liked standing on my own two feet. My take has always been accepting money from friends was the quickest way to lose them, but this was different. This marriage to Max will be the job from hell and I’ll deserve every penny.

Tracy Ellen was born in Indiana to middle-class parents, the third out of five hellions. She’s lived in the Midwest her whole life–in a small town, on a farm, and in the big city. Currently, she resides in the suburbs of St Paul, Minnesota with her incredibly tolerant, awesome husband and family. Always an avid reader of all genres, her writing career began in 2012 with the debut of A Date with Fate, a blend of contemporary-romance/ romantic suspense / and romantic comedy. Tracy’s goal as a writer will always be to create worlds readers can’t wait to dive into for a few hours of fun and excitement. She thrives on trying to come up with the witty banter, steamy love scenes, pulse-throbbing action, and belly-laughing humor her reader fans have come to love and expect in her novels. Please let Tracy know how she’s doing!