Two months in the spotlight change Kylah McKinley’s life forever. Falsely accused of murdering her husband Ted, she learns through past life regressions that she’s the reincarnation of Alice Kyteler, a Druid who lived in 14th century Ireland. Major events in her life parallel Alice’s.

Someone tried to kill Kylah along with Ted in a hit-and-run. Who can hate them both this much? Her journeys to the past as Alice give her the answer.
As Kylah’s trial date approaches and she fights to maintain her innocence, she must learn from her past or forever be doomed to repeat it.

Kylah shut Ted’s den door. She couldn’t bear to look at the spot where he gasped his last breath. His presence, an imposing force, lingered. So did his scent, a blend of tobacco, pine aftershave and manly sweat. Each reminder ripped into her heart like a knife. Especially now with the funeral looming ahead, the eulogies, the mournful organ hymns, the tolling bells . . .

These ceremonies should bring closure, but they’d only prolong the agony of her grief. She wanted to remember him alive for a while longer, wishing she could delay these morbid customs until the hurt subsided.
Throughout the house, his essence echoed his personality: the wine stain on the carpet, the heap of dirty shirts, shorts and socks piled up in the laundry room, the spattered stove, his fingerprints on the microwave. But she couldn’t bring herself to clean any of it up. Painful as these remnants were, they offered a strange comfort. He still lived here.
“I’ll find that murderer, Teddy,” she promised him over and over, wandering from room to empty room, traces of him lurking in every corner. “I’ll do everything in my power to make sure justice is served. Another past life regression isn’t enough anymore. I know what I have to do now. And I promise, it will never, ever happen again—in any future life.”
She inhaled deeply and breathed him in. “Go take a shower, Teddy.” She chuckled through her tears as the doorbell rang. She cringed, breaking out in cold sweat when she saw the black sedan at the curb.
“Not again.” No sense in hiding, so she let the detectives in.
“Mrs. McKinley, we need your permission to do a search and take some of your husband’s possessions from the house,” Nolan said.
“What for?” She met his steely stare. “I looked everywhere and found nothing.”
“Mrs. McKinley, the cupboard door was open, four jars of herbs are missing, and the autopsy showed he died of herb poisoning. Those herbs,” Nolan added for emphasis, as if it had slipped her feeble mind. “Foxglove, mandrake, hemlock—and an as-yet unidentified one,” he read from a notebook. “The M.E. determined it was a lethal dose.”
Sherlock Holmes got nothin’ on him, she thought.
“Where’s this cupboard, ma’am?” Egan spoke up.
“Right there.” She pointed, its door gaping exactly the way she’d found it that night. Nolan went over to it and peered inside.
“Ma’am, it would be better if you left the house for a half hour or so. Please leave a number where you can be reached,” Egan ordered.
Nolan glanced down the hall. “Where is your bedroom?”
What could they want in the bedroom? “It’s at the top of the stairs on the right. But we didn’t sleep together,” she offered, as if that would faze them. It didn’t.
After giving him her cell number, she got into her car and drove to the beach.
An hour later, she let herself back in and looked around. They’d taken the computer, her case of CDs, her thumb drive, her remaining herb jars, Ted’s notebooks, and left her alone with one horrible fact: This was now a homicide case and she was the prime suspect. 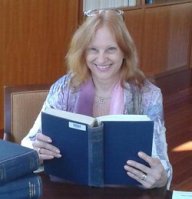 Diana’s passion for history and travel has taken her to every locale of her stories, set in Medieval and Renaissance England, Egypt, the Mediterranean, colonial Virginia, New England, and New York. Her urban fantasy romance, FAKIN’ IT, won a Top Pick award from Romantic Times. She is a member of Romance Writers of America, the Richard III Society and the Aaron Burr Association. She lives on Cape Cod with her husband Chris. Together they own CostPro, Inc., an engineering business. In her spare time, Diana bicycles, golfs, plays her piano and devours books of any genre.