TEN years ago, the most handsome boy in school asked Zoey Benton to senior prom. The Olympic-bound darling of the gymnastics world was over the moon with excitement.

SHE had no way of knowing he was a budding psychopath, as well. WHEN she comes to, she’s vomiting, her dress is askew, and a chunk of her hair is missing. Shattered, she has no recollection of what happened. A career-ending injury soon follows. With her Olympic dreams quashed and her world in free-fall, Zoey retreats within herself.

AFTER a decade of healing, she meets the man of her dreams. An Olympic gold medal wrestler, Ash Harrington is a national hero. To Zoey, he’s everything a man ought to be and more. She’s just beginning to live and love again when the unimaginable happens. Gymnasts begin to turn up dead. Raped and killed in unspeakable fashion, their broken bodies are left on display for the world to see.

YET, this calculated killer is fixated on one gymnast in particular—the one that got away. Biding his time and honing his skills, he saves the best for last. If Zoey falls into his clutches this time, there will be no second chances.

SET against a backdrop of elite gymnastics, FALLEN will keep you BALANCED on the edge of your seat! 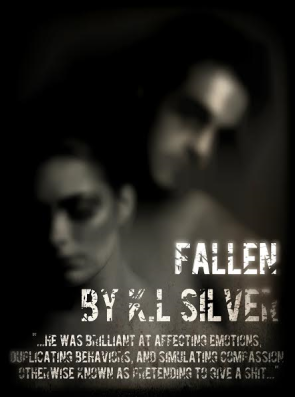 A little about K.L Silver, the person.

Raised in central Canada, K.L. left home and country at the age of fourteen to train for the Olympics at the National Academy of Artistic Gymnastics in Eugene, Oregon. From her unique perspective of a Canadian who’d lived in the United States (twice), she blogged the 2012 US election from start to finish. Often, her hard-hitting articles sparked conversations which garnered hundreds of comments.

She has won numerous awards for her writing and is a member of the Manitoba Writers’ Guild.
Her interests are far-reaching and eclectic, from erotica to politics, from true crime to country music, from word games to human nature. She equates yoga with sanity.
She would love to write a best selling novel. Next to that, she’s good with world peace. Namaste.

a Rafflecopter giveaway
Blog Tour Brought To You By:
Bit’N Book Tours

3 thoughts on “Fallen by K.L. Silver”