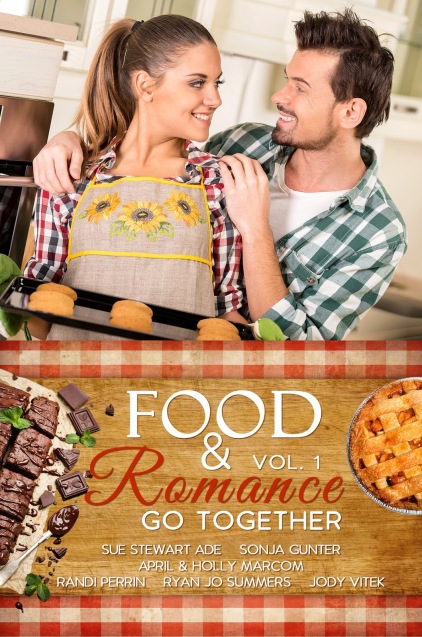 6 short, sweet stories perfectly pairing food and romance. Each include a yummy recipe.
Pumpkin Blossoms by Sue Stewart Ade
Jillian yearns for love and falls for a dog and her sister’s former boyfriend. But the dog bolts and the boyfriend seems to still have feelings for her sister. Can she find love with a man who can’t see who she really is?
Coffee Cake Chaos by Ryan Jo Summers
Avianna Goodman needs cash. That’s why she agreed to cater her ex-boyfriend’s engagement party. Seeing Sawyer again confirms Avianna still isn’t over him. The biggest mistake Sawyer Steele ever did was walk away from the one girl he was crazy about. Now Avianna’s back in his life–and he can’t have her.
Apple Pie Delight by Sonja Gunter
Lost loves reunite after forty years of deceptions. Can a Sun-Kissed Apple Pie bring Toril Swanson and Erik Sutton together again?
Peanut Butter Kisses by Jody Vitek
Beth Canton attends her ten-year class reunion to catch a glimpse of her long-time, school-girl crush, Hank McGrath, but doesn’t hope or even dream of anything more. She leaves with more than a glimpse, while Hank can’t get enough of her peanut butter kisses.
Boston Crème Breakdown by Randi Perrin
Kestin just wants to return to life as normal after returning home from the war, but there’s no way his life will be the same again. Looking for easy money to make bills, he stumbles over an ad to teach perpetually-single Erica to cook, and can’t resist answering it. He never expected to actually get the job—or to be attracted to her.
The Chocolate Queen by April & Holly Marcom
In a world sprinkled with superheroes, you never know when the person beside you is one of these few elite. When Clarissa begins to fall for a guy who harbors a super secret, it feels like she’s not good enough. But he may just help her discover a super sweet secret of her own.

Sawyer blinked, drawing back. “What makes you think you didn’t get the catering job?”

“Isn’t that what you came here to tell me? Why you went to such extremes to find me to deliver your mother’s decision in person? She gave the job to another caterer.” She knew her voice was rising but she didn’t care. “I wasn’t good enough back then to date you and I’m not good enough now to cater your party.” She crossed her arms over her chest, ending with a sigh.
Sawyer held out his hands to her. “Wait a minute. Back up a second, Aviana.”
“Why did you come here?” Never in her wildest dreams did she think she would ever ask such a question of him, like this, but her pride demanded it.
He lowered his hands. “To tell you that you’re hired. You have the catering job.”
She blinked. “I do?”
“Yes, you can get that roof for your aunt and uncle now.”
“Your mother picked me to cater your event?”
He nodded. “With some heavy prompting from me. It’s my celebration after all. I think the coffee cake was a strong convincer.”
Aviana could only imagine how that conversation had gone between them. She had the job? “At my asking price?”
“Of course.”
“So why didn’t she just call me with her decision? Like she said she would?”
Sawyer leaned back, head tilted to one side. “Aren’t you glad to see me? Or did the light dancing in your eyes when we met yesterday lie?”
Her eyes danced?
“Even now, upset with me as you are, your face tells me you still yearn for me .Does your face lie to me?”
“No, but what does it matter? How can you want me and still pledge yourself to another? It isn’t fair to any of us.”
He scrubbed his face and then pulled her to him. “Aviana, I need to know. Do you love me?”
“Yes, I do.” The admission tumbled out before she could reconsider.
He exhaled a heavy sigh. “Good.” He wrapped his hand behind her neck and drew her close, kissing her.
He tasted of fresh mint and cinnamon. He felt solid and warm. Her fingers reached out to explore, lifting his sweater and going under it to find the matured, toned muscles.
His fingers twined in her hair. Bolts of white heat rippled over her and a moan escaped her. Her eyes slid closed as his fingertips moved to slowly drag along her back.
Pulling breathlessly apart, she gasped for air. “Wow.” She ran her tongue over her lips. He’d grown into a great kisser.
“You taste like chocolate.”
She smiled. “Guilty pleasure.” She was pleased he was just as winded as her. It felt just like when they had made out years ago.
Then that contemplative, serious look returned to his eyes, sobering her. “Do you trust me? Completely?”

Ryan Jo Summers is offering her own private giveaway.
&