The New York City subway was dangerous, the parents told the three Wilton High School graduates, but the girls weren’t taking no for an answer. Kelly Singleton, soon to be an NYU freshman, and her two friends board the hazardous subway train. Several stops later, her two friends get off, but Kelly is nowhere to be found. It is the torrid August of 1984, and crime is at an all-time high. Kelly’s desperate parents turn to reporter Carol Rossi and police detective Jerry Stevenson to find their missing daughter.

Two special excerpts for you to enjoy.

The subway was dangerous. But the three girls wouldn’t take no for an answer. Kelly Singleton was moving from her Connecticut home into her NYU dorm, and the subway was part of her new life, she told her concerned parents.

Jamie Ryan and Christina Moore were her two best friends and would be visiting Kelly whenever they could. They insisted that they needed to learn how to navigate mass transportation.

For all three of them, riding the subway was a rite of passage. That was their final plea.

The old, rusted trains they were so anxious to ride broke down regularly, leaving passengers to wait, sometimes forty minutes and longer, in dangerous circumstances, their parents argued. The Daily News and The New York Times frequently reported gang violence on the trains, which in the last ten years had become the symbol of the city’s rising crime rate.

Gangs, boldly wearing identifying colors, often openly roamed the cars, intimidating passengers, bullying them to hand over their pocket money with no fear of recrimination, as if they owned the trains. Gang-tagged graffiti covered every inch of the filthy trains, including the windows.

It was August 1984 and a crisis situation for New York City, with two thousand homicides expected yearly.

~~~~~~~~~~
However, the girls argued that millions rode the subway every day, and crimes usually occurred in the early morning hours. The girls would travel during morning rush hour, and to keep everybody from worrying, they would return home during rush hour in broad daylight.

Jack Singleton, a New York City attorney and managing partner of the firm, didn’t take well to losing the subway debate; he was only too familiar with the city’s crime rate and the subway system. So the Singletons were the last of the parents to acquiesce and Jack only after some arm-twisting from his wife Nina. He wasn’t too happy about his daughter attending NYU in the first place.

He’d be relieved when the three girls got this trip out of their systems, saw the dangers of the trains and got back home. 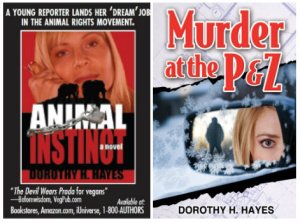 Animal Instinct ~ Murder at the P&Z

Dorothy Hayes, a staff writer for local Connecticut newspapers for five years, received and honorary award for her in-depth series on Vietnam Veterans from the Society of Professional Journalists. Prior to that she was a Language Arts teacher. A staff writer for a national animal protection organization, for six years, she wrote Animal Instinct, 2006. Dorothy lives in Stamford, CT with her husband, Arthur. She also raised four children, and is the mother-in-law to three, grandmother to fourteen, and is GN to Bella. She writes for WomenofMystery.Net, CriminalElement.Com, and is a member of Sisters-in-Crime-Tri-State Chapter, and Mystery Writers of American.