Is there hope for a grieving mother’s heart?

Ecopsychologist Dr. Margo Updike loses herself in a shadow life after her daughter’s tragic death. When a century storm deposits a young girl on Maggie’s secluded beach in Puget Sound, a miraculous renewal begins. Then the apparent orphan exhibits signs of neglect and worse, prompting Maggie’s vow to protect and heal her—no matter the cost.

The arrival of a mysterious man claiming to be Sorcha’s father upends Maggie’s life. She finds Morrissey strangely irresistible even as her friend Sheriff Ajax Smith questions the man’s motives and odd behavior. As a serial killer’s victims begin surfacing in Seal Cove, Jax must curb his suspicions to enlist Maggie as a profiler.

Will Jax and Maggie find the murderer before he strikes again? With Morrissey’s secrets trapping Maggie on destructive shoals between reality and legend, can she grasp his true nature before losing her chance to rebuild a life worth living? To what depths—and heights—will she go for a daughter, a beloved man and, ultimately, her humanity?

Maggie leaned toward Kaci and, keeping her voice low,
said, “Let’s go out to the deck.”
They dressed for damp cold in the mudroom, and after checking
Sorcha and shushing the dogs, they let themselves out through the sliding door.
The friends headed for the covered space around the hot tub. With Kaci’s help, Maggie
removed the locked cover.
“Remember?” she asked Kaci.
“Your dad’s old tub? Of course, silly.” When they were
girls, for the important talks they gravitated toward Ephraim’s tub, then built
of cedar staves.
“Well, that old thing’s slated to be plumbed for a water
feature. This is Mom’s state-of-the-art spa. I think it’ll do.”
Peeking from the hoods of winter coats, they traded conspiratorial
looks before stepping out of their mules and clambering onto the top platform. With
a controlled slide, they occupied the dry space. Wriggling her wool-clad toes, Kaci
said, “Comfy, Mags. You could fit six adults in here easily.”
“I know. Mom wanted to modernize. She intended this for
scads of grandkids.”
“Oh, Mags.” Kaci reached a gloved hand toward Maggie,
who gripped it for comfort. “Now. Tell me what happened this morning.”
First Maggie told her friend about the early morning swim,
finishing with, “She didn’t even seem cold afterward. I was practically blue and
the dogs were exhausted. How can a four-, maybe five-year-old girl swim that far?”
Glancing through the glass doors toward the sleeping girl,
Kaci’s mouth formed a silent wow. She
said, “No wonder she’s tired. But kids have faster metabolisms than adults, don’t
they?”
“Well, yes, but Zoe certainly couldn’t have… Anyway
some other bizarre things are starting to surface.”
“Like?”
With a sense of relief, Maggie leaned forward and said,
“Kaci, she didn’t know how to use doorknobs. And the bathroom seems like foreign
territory. I caught her squatting in the mudroom before you came. She thinks it’s
a fine game when I set her on the toilet. Just laughs and giggles. And she hasn’t
put three words together.”
Kaci’s regard wandered over the quiescent girl. “She understands
you, though. And didn’t I hear an accent? Plus Sorcha’s not a common name. What
is it? Russian?”
Maggie said, “I’m thinking Celtic. But Kaci, everything seems foreign to her. She played
at opening and shutting cabinets and drawers until the salmon distracted her. I’ve
put the pots and pans away twice now—with her helping me. She’s so bright and aware,
I’m afraid that at the very least, she’s been secluded to the point of abuse.”
“No kidding. Some strange cult, you think?”
Maggie laughed then. “This from a woman who worships
the earth as Goddess and has tattoos covering nearly every inch of her body.” 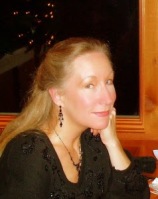 Award-winning writer Janine Donoho grew up navigating extremes—perhaps due to the ups-and-downs of her San Franciscan birthplace. That Escher landscape primed her to embrace imaginary worlds. With one foot planted in fuzzy science and the other in invented realms, she inhabits the land of WHAT IF. Published in novel-length and short fiction, along with essays, Janine pursues the thumps that echo in the night—and writes about those, too.
With her intrepid husband, Italian greyhound and tuxedo cat, Janine makes her home in the spectacular Okanogan highlands of Washington State. Mountain lions, coyotes, and bears—oh, my!